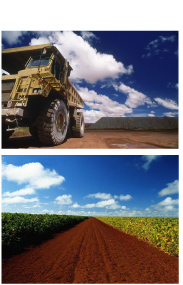 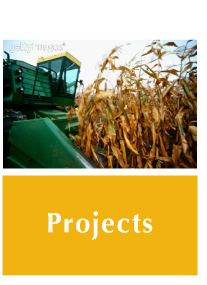 HISTORY — In 2006, the Company set out a path to examine the development of the Martison Phosphate Project as a vertically – integrated phosphate fertilizer producer. Under this development scenario, the Project was envisioned to consist of the Martison Phosphate Deposit and a planned phosphate mine, beneficiation plant, conversion complex and solid fertilizer production facility. Phosphate ore from the mine was to be processed into a concentrate in the beneficiation plant. The concentrate was to be transported by slurry pipeline to a conversion complex near Hearst where it was to be combined with sulphuric acid to produce phosphoric acid. Sulphuric acid was expected to be sourced either from existing nearby base metal smelters or a sulphuric acid plant which was to be built by the Company as part of the conversion complex. PhosCan was to further process the phosphoric acid into superphosphoric acid (SPA) and/or mono-ammonium phosphate (MAP) fertilizer which was to be sold to fertilizer dealers serving the agricultural regions of western Canada and mid-western United States.

PhosCan commenced a Bankable Feasibility Study during the winter 2008 field program with the completion of the following: a geotechnical program on the proposed mine pit and infrastructure areas; collection of a 40 tonne bulk sample for metallurgical testing and final beneficiation plant design; and a hydrogeological program examining water flows within the proposed mine pit area. During the balance of the year, the Company also completed several activities, including: an upgrade of the Fox River crossing and the existing Fushimi Road (completed by a construction company in a joint venture with a local First Nation); archaeological, traditional native land use and occupancy, and biological studies; purchase of a portion of the land required for the proposed MAP granulation plant in Brandon, Manitoba; and preliminary site layout and process flow diagrams and design criteria for the proposed MAP granulation plant and a portion of the proposed conversion complex.

On December 8, 2008, PhosCan announced that, in light of current financial market and fertilizer industry conditions, it was deferring several tasks related to the development of the Martison Phosphate Project such as construction of the balance of the permanent road to access the proposed mine site and detailed engineering. As a result, PhosCan no longer expects production to begin at the Project in 2012 as previously announced.

Throughout 2009, the Company remained prudent and disciplined as it worked to find the right balance between advancing the Martison Phosphate Project and preserving its cash. In that regard, the following activities were planned and executed under a reduced work program: Class C – Environmental Assessment of the permanent access road extension, permitting, geophysics at the proposed mine site, taking mine claims to lease, and pilot plant-level ore beneficiation tests utilizing the 40 tonne bulk sample. The pilot plant tests continued though out 2009 and 2010.

During 2010, several developments have led the Company to consider a revised development plan for the Martison Phosphate Project as a stand-alone phosphate concentrate (phosrock) producer. Specifically with respect to the Project, these include: the pilot plant work which indicated that niobium contained in the Martison Phosphate Deposit could potentially be recovered, thereby adding a second revenue source; and the significantly reduced capital expenditures required to develop a stand-alone phosrock producer versus a vertically – integrated phosphate fertilizer producer. Within the phosphate fertilizer industry, the developments include: an improvement in phosphate fertilizer prices; permitting issues in the major phosphate-producing states of Florida and Idaho, which have contributed to a continued decline in phosrock production in North America; the expected closure in 2013-2014 of Agrium Inc.’s phosrock mine in Kapuskasing, Ontario; and the sale by Vale S.A. of minority interests in the Bayóvar phosphate mine project to the Mosaic Company and Mitsui & Co. Ltd., thereby removing a significant new near-term source of merchant phosrock supply from the market.

For further details of PhosCan’s revised development plan for the Martison Phosphate Project, please see the “Investor Relations” section of the website under the sub-heading “News Releases”.